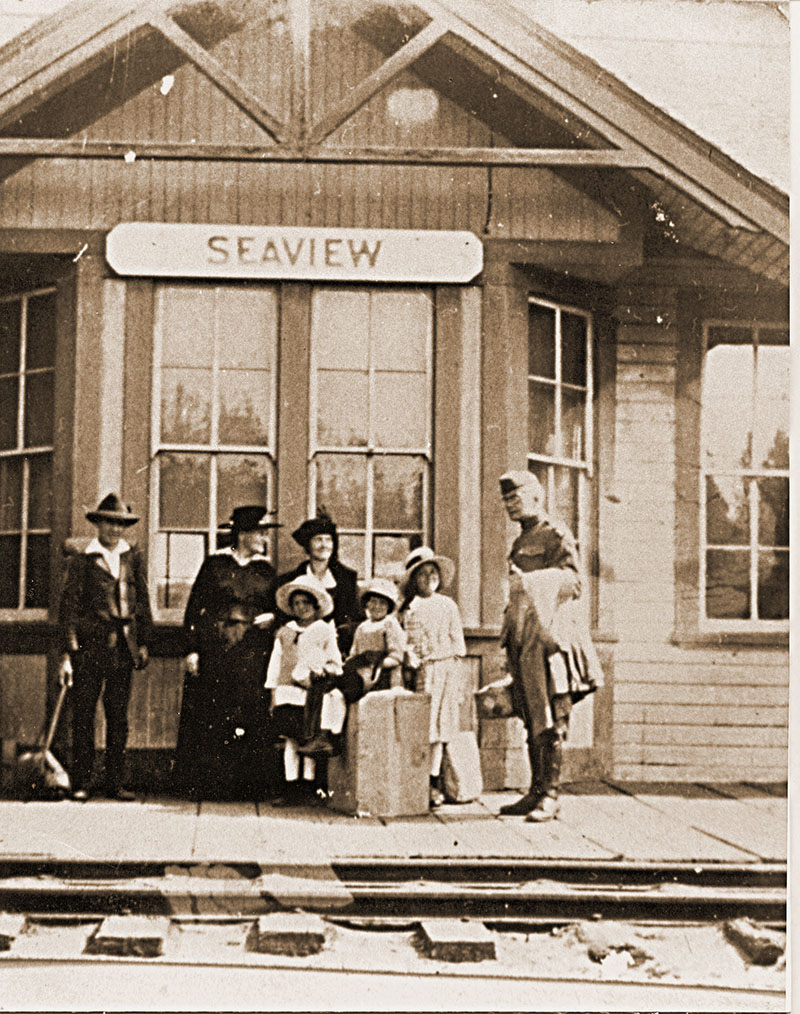 Seaview’s popularity as a vacation site began in the 1870’s when families would arrive by horseback, wagon, stagecoach and steamer to camp in the Willows, north of Cape Disappointment. The transition of Seaview from campground to resort is credited to Jonathon L. Stout who is believed to have come to the Peninsula as a barrel maker from Ohio in 1859. He married Ann Elizabeth Gearhart, daughter of Oregon’s Phillip Gearhart in 1860.

He was postmaster of Ilwaco, operated a liquor store and stagecoach line. They homesteaded 153.5 acres near the Willows in 1880 to create a summer retreat that was registered as “Sea View” at the Oysterville courthouse in 1881.

Lewis Alfred Loomis, one of the peninsula’s founding father’s secured a mail contract between Astoria, Oregon and Olympia, the capital of Washington. The slowness of the stage line used, convinced Loomis that he should build a railroad to handle his business.

Construction of his railroad, the Ilwaco Railroad and Navigation Company, began in March, 1888 at the Ilwaco wharf, which was the central place of its business. Steamers could only reach the wharf after the tide was in mid-flood. So train departures were successively later over a month’s time. It is likely that the Ilwaco line was the only organized railroad to operate by a tide table, thus its nickname, the “Clamshell Railroad”.

The system’s first depot was built in Ilwaco not far from the wharf. Frank Strauhal, a summer camper, purchased Stout’s store and bathhouse in Seaview. He offered the railroad a lot, if a depot was erected on it. The line accepted and thus a wooden platform shed was built as a train stop on the current Seaview Depot site. The railroad reached Long Beach by July 1888. Track laying continued at a leisurely pace, terminating at Nahcotta, thirteen and a half miles north of Ilwaco.

In addition to the mail contract, passenger business and freight helped the railroad prosper. Over a thousand sacks of oysters were transported each week from Nahcotta to Ilwaco. From Ilwaco they were carried by the General Canby to Astoria for shipment to market in San Francisco. The freight charge from Nahcotta to Astoria was seventy-five cents a sack. Thursday was oyster day. Citizens with business in Astoria generally avoided that day.

In 1900, Loomis retired selling to a subsidiary of Union Pacific, the Oregon Railroad and Navigation Company. Equipment was immediately improved and train crews were required to wear uniforms. At a 1905 Directors’ meeting the construction of a regular depot to replace the platform shed at Seaview was authorized. You are sitting in that building today.

The railroad continued in operation until September 10, 1930, when car ferries and highways brought most of us here.  The only remaining are the Long Beach and Seaview train depot buildings. 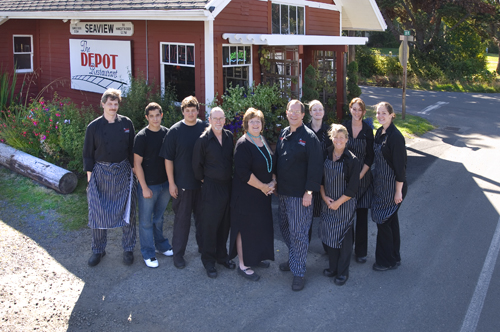 Enjoy contemporary and historic photos of our Seaview train depot on our page all about historic Seaview, Washington.